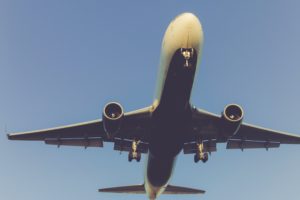 The will-o’-the-wisp of aviation continues to demand airframe and exterior resiliency without sacrificing lightness and substantial fuel savings. While many materials have been tested in trying to attain this balance, their usage is regulated by the provider’s ability to create them.

The world’s first metal airplane dates back to 1915 when Hugo Junkers, an aviation pioneer, developed a corrugated sheet iron covered tubular-framed metal fuselage. The metal surface made the aircraft stronger and harder, but the rough surface resulted in substantial drag. Moreover, each plane had custom-crafted surfaces, making them slow to produce and assemble.

The rise of aluminum aerospace machining began in the 1930s. At the time, aluminum seemed to be ideal. It was inexpensive, lightweight, easy to machine, and it showcased a sleek, modern looking exterior.

It paved way to the era of the silver plane, a term still familiar in aviation these days. What followed was stainless steel construction and advanced superalloys after WWII and titanium in the early 1960s, utilized mostly for military aircraft. With every step forward, aerospace machining processes and techniques needed to evolve to keep up with new experimental materials.

In the 1970s, aerospace materials witnessed the first carbon fiber composites. These were remarkably lightweight, yet they can be fashioned to a tensile strength about five times than steel. Plastic and epoxy resins were used with composite aerospace components to form a matrix that kept fibers intact as one-piece designs.

These resulted in pre-formed components which reduced the number of heavy fasteners and joints, eradicating potential weak spots. In modern aircraft, one-piece designs are used wherever possible.

New composite materials and metals are constantly being developed for increased strength, lighter weight and for heat and corrosion resistance. Developments in aerospace machining and cutting are keeping up with the advancement of aircraft construction. For several decades, CNC machines have significantly contributed to the production of a wide variety of aircraft parts, sections and exterior panels.